An Untidy Package: Women and the Newfoundland Cod Moratorium 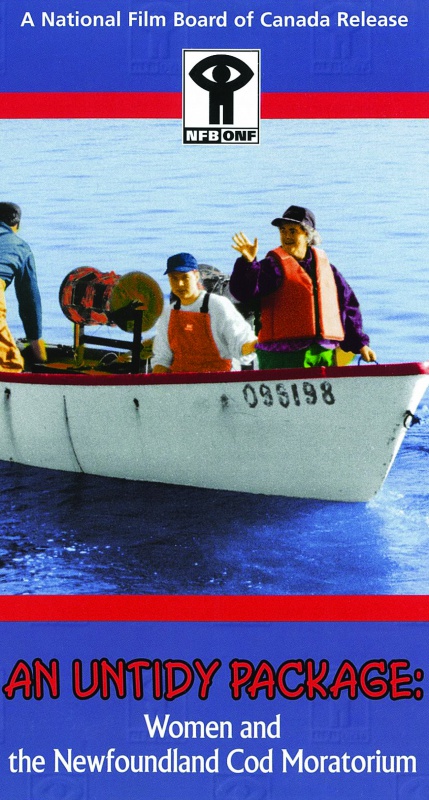 This film explores the effect of the cod moratorium on five women, their families and communities.

In the summer of 1995, as my family and I drove around rural Newfoundland for our summer vacation, we noticed how quiet the harbours were, with the cod moratorium in its third year. I got to wondering about the women who had worked in the fishery. Most of the federal compensation programs were geared to those who had fished on a boat, but women largely worked on shore, in fish plants or in administering the family enterprise.

Studio D was interested, and my friend Jane Robinson and I travelled about Newfoundland during the winter and spring of 1996, researching and meeting women who could be in such a film. I was also working on getting The Elf ready for a summer shoot, and my children were only five and eight. Plus, we had a new puppy. But our project was approved for production!

Then disaster struck. The NFB was changing its structure, and Studio D was closed. It was felt that women no longer needed their own studio at the NFB. A slate of films was announced, and ours was not on it. In fact, no films by women were on it. After this was pointed out, our film was slipped back on to the list of that years’ productions.

We wanted to film while the weather was still good, but as I was tied up with The Elf, the shoot was planned for the day after Labour Day. Unfortunately, our cinematographer’s father had a stroke in Ontario, and he had to leave. We could not get a replacement till after Thanksgiving, and ended up filming in Labrador and Rose Blanche when the weather was turning chill.

NIFCO had invested in an AVID, and it arrived in time for Francine and me to start editing. There was a learning curve, of course, but Francine was more than up to the task. The hardest part was that we reported to the NFB steering committee, who were scattered all over the country. No one on the committee had much interest in our film, and there was little sense of working with anyone who actually cared, aside from our producer Nicole Hubert, and Annette Clarke from our local NFB office.

When the film was finished, it was passed on to the Head of English Production, who didn’t want to approve it. She was a Newfoundlander who had been spent her career on the mainland, and she felt the film wasn’t positive enough. I argued that there was one woman in the film whose life had actually been improved by the cod moratorium. The training offered after her fish plant was closed allowed her to return to school and become a community health nurse. Apart from that, it was true, the closure of a province-wide industry was not exactly a good news story.

The film was eventually approved, but too late to enter any festivals. We got a last-minute spot in the Atlantic Film Festival, at the same time as the Industry Luncheon. There were about ten people at the screening, mostly people who had worked on the film, and a couple of local fisherpersons who were actually interested in the subject.

When I look at it now, I think it’s a pretty good film. But the hard year of making two films, each with their own set of problems, had taken a toll on me. The stress led to a depression, which I did not recognize at the time. I decided I could not work as a freelancer anymore. I was tired of the constant struggle. I started looking for a job, something that would be steadier in terms of a paycheck, and also have less challenges.