Little Mountain: An Election from the Inside 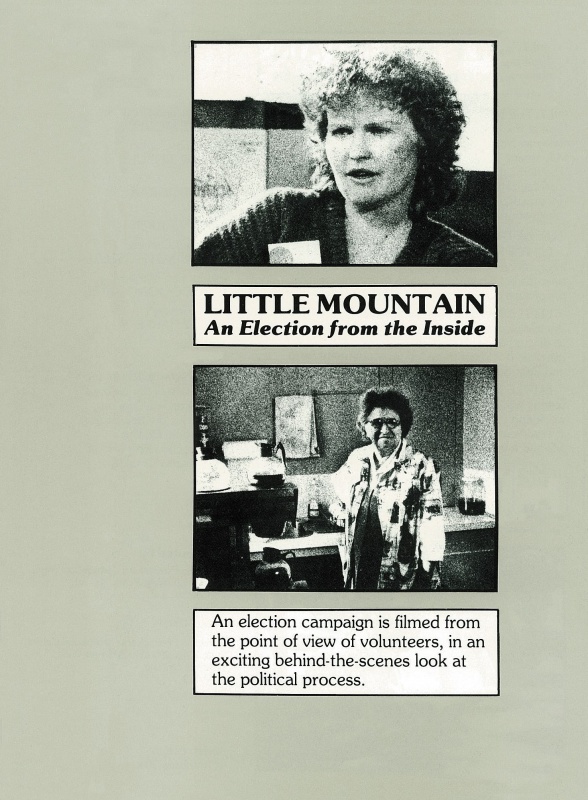 A behind-the-scenes documentary that examines the role of NDP campaign volunteers in the Vancouver riding of Little Mountain.

I didn’t go to film school, but in 1981 took a crash course in filmmaking offered at Studio D, the Women’s Studio based at the Montreal headquarters of the National Film Board of Canada. I had an idea for a film. I had worked on several NDP election campaigns, and I loved the little world that springs up when an election is called, ending after election night – stakes are high, time is short, and the core staff has to enlist the help of hundreds of volunteers to hopefully accomplish the task of getting their candidate elected.

I was obsessed with making this film. I changed the thesis topic for my Master’s at SFU, to make it an ethnographic study of the making of an independent documentary. Called Independent Filmmaking: The Double Commitment, the thesis was that a filmmaker needs a commitment to both form and content for an independent film to turn out well, given that they are so difficult to make. The thesis details my efforts to get the equipment, money, and cooperation to make the film, never knowing if I would be ready in time for the election.

As it turns out, I was ready. Little Mountain: An Election from the Inside follows the 1983 provincial election in British Columbia, focusing on the riding of Vancouver-Little Mountain.

The crew were all recent graduates from the film department at SFU. I learned a tremendous amount during shooting. I fell into my first major depression in the month following the shoot, but I still managed to apply for and receive an Explorations Grant from the Canada Council, which gave me the money to hire an editor and pay for finishing costs. I was pleased with the way the film turned out, and thrilled that I was invited to screen it at the 1984 Grierson Seminar, a prestigious annual event for documentary filmmakers in Ontario that I had longed to attend.